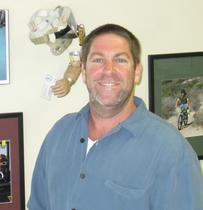 Dino has been serving amputees in Southern California since 2001. Although most of his clients are here in Southern California, he has clients who come from around the country. This is Dino’s second career, his first being woodwork. After doing custom woodwork for 8 years in Carmel Valley, Pacific Palisades, Beverly Hills, Santa Cruz, San Luis Obispo... Dino decided to use his college education along with his blue collar handskills to become a Prosthetist and help those in need.